I mentioned here that I avoid giving marital advice because I feel unqualified. Most times, I ignore the thought but sometimes, like now, I cannot get it off my mind so here goes…

Due to this endemic problem of role reversal for men and women (husbands at home while the wives become breadwinners) as highlighted in my previous post, marital conflict has rapidly increased and divorce rates are skyrocketing.

While we are struggling to come to terms with this, I have a suggestion; but first, permit me to share a story.

My brother and I have a 15-month gap between us and growing up was a bit rocky. We bickered a lot and I did not respect him much but he (being easy-going) did not seem to mind. My dad was always berating him for not ‘knowing book’ like I did. I hated this but at that age, I could not fathom why he was not as studious as I was. We had a year gap in school too but I wrote my common entrance exams in Class 5 while he wrote his in Class 6 (final year of Primary/Elementary School).

We began JSS1 together and I dreaded it because I knew Daddy was going to compare our performances (even though we were in different schools) and my brother would fall short. In our third year of Secondary School, it happened! He failed while I was to proceed to senior secondary school. Even as a teenager, I was quite stoic but I cried that day (to my mum’s surprise). I was heartbroken for him. He was such a good guy, he was making so much effort to be better. It was so unfair! And I knew my dad would blast him with ‘tough love.’

I remember making a resolution that day never to call him ‘stupid’ when we quarrelled. Of course, like any dutiful teenager, I still thought he was stupid sometimes (like all boys), but I told myself I was no longer allowed to call him that or any other epithet referring to his cognitive skills. It did not matter how angry I was, it was the elephant in the room I was to ignore. Our relationship improved after that. 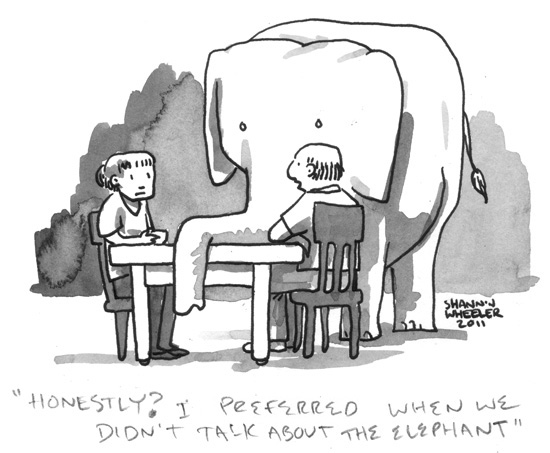 My marital advice is actually not new; it is what our mothers and grandmothers have been doing. One of the top reasons for marital conflict is finances. When the balance tilts in favour of the woman being the breadwinner, no matter how angry or irritated she feels, she should ignore the elephant in the room. For men who take their gender roles seriously (typically African, Arab and Asian men), they like their egos massaged (I am a learner in this aspect, and many other aspects actually). They want their efforts appreciated (no matter how little), their matters kept private and their advice and opinions sought – who doesn’t? I believed we were in modern times and waved off such silly advice when I got married. Ain’t nobody got time for all that crap, I thought. My grandmum actually advised me to kneel when serving my husband his meals.

Now, I realise the point she was trying to make was that a woman needs to stoop to conquer. As the saying goes ‘The husband is the head while the woman is the neck’. The neck turns the head in the direction it wants but it is subtle; you don’t see them in conflict.

Men have classified their wives arrogant (and all its synonyms) because she mentioned that she was tired of doing everything and needs him to pull his weight; or because she asked him of who would foot the bills now that he was insisting she quit work; or she told him the money he provided for housekeep was insignificant. It is supposed to be the elephant in the room that she is now the breadwinner. No matter what happens, SHE SHOULD NOT MENTION IT! 😀 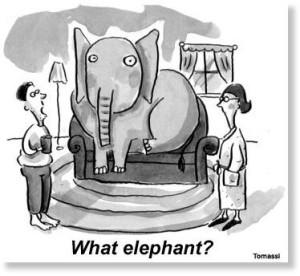 The key to bringing up the elephant though, is humour. However, bear it in mind that the lack of finances is already fraying on your man’s nerves making him unreasonably sensitive so tread carefully.

On the other hand, you are free to dance a salsa with the elephant if your husband does not take his role as provider and ‘Lord Master’ seriously; or if you are past caring about your marriage; or you are a feminist insisting on equality in marriage. It won’t secure your union, I assure you; but then, maybe marriage is over-rated? 😉

PS: I have to include this: It is counter-productive to fend for your husband completely and provide all his needs because he cannot provide at the moment (and you want to show you love him). You should use your resources to provide for the family but still leave some room for him to contribute. Appreciate his contributions, no matter how small and encourage him kindly. Don’t flaunt your money in his face but don’t be stingy about it. Balance is key. Keep figuring it out; I am too. 🙂