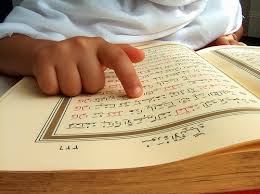 My son has begun his life’s sojourn into formal Islamic education. We used to take a few lessons on the Arabic alphabets and a few short surahs (Chapters of the Holy Qur’an) but we also wanted him to interact with more Muslims in a classroom. They do tend to learn faster that way and it is more consistent.

During his first week, I felt separation anxiety every time I dropped him off. It was weird because I thought I was over that since he started regular school a couple of years ago. I would walk him to the gate or classroom where he would wave solemnly and turn to enter and my smile would falter. Immediately I returned to pick him, promptly at the closing time, I would grill him about how the class went; if he made new friends; if anyone fought with him or beat him, but he would be all smiles. Running ahead of me excitedly, he would tell me names of new friends (which I would hurriedly commit to memory) and snippets of how the 2-hour class went. Yeah, I know…a mere two hours!

This reminded me of when I began my Islamic education too. I cannot quite remember my age but I was older than my son is, and I went with my brother. The school was a weekend one and lasted about 4 hours. It was a farther distance from our home than my son’s is and we used to be dropped off in the car but would often walk home when we closed.

I do not have fond memories of this school. I don’t think I ever discussed it with my brother but I was filled with dread whenever it was weekend and we had to go. I know he was too. I was a good student and did not get beaten by my tutor but the matron of the school (who I will call ‘Ma’) scared the hell out of our little minds. Pa, on the other hand, was a gentle soul.

Abu-Darda (R.A.) reported that the Messenger of Allah (SAW) said, “He who follows a path in quest of knowledge, Allah will make the path of Jannah easy to him. The angels lower their wings over the seeker of knowledge, being pleased with what he does. The inhabitants of the heavens and the earth and even the fish in the depth of the oceans seek forgiveness for him. The superiority of the learned man over the devout worshipper is like that of the full moon to the rest of the stars (i.e., in brightness). The learned are the heirs of the Prophets who bequeath neither dinar nor dirham but only that of knowledge; and he who acquires it, has in fact acquired an abundant portion.” – Riyad Saliheen Book 13, Hadith 1388

Yet, Ma attracted such curiosity out of me. I used to peep at her if she performed wudhu beside me. I would surreptitiously try to catch a glimpse of her face when she prayed beside me. She was not Nigerian, I could tell even though she was always in black and all I could see were her hands. Her complexion, her accent and her children’s looks gave her away.

I think I was eight or nine when this family came in quite late. Classes were in progress in an open space (we had long desks and chairs arranged in the compound) so when the group came in, we all looked up, distracted. A man reported one of his daughters (I think?) to Ma and it was a grievous crime that this teenager had committed. Ma ordered for canes and holding her niqab to her face with one hand, she lashed this teenager repeatedly following her around as she tried to escape the burning strokes. The cane broke and she asked for another! It was amazingly scary seeing this rather diminutive niqabi striking a precocious teenager who was even bigger than she was. The cane whipped the student’s hijab off and I saw blood streaks. It was gruesome and we were horrified.

Alhamdulillah, our Islamic school was eventually changed (my parents had begun to hear rumours about the school which probably correlated with our complaints). The new Islamic school was even farther (an hour walk) from home so we were usually dropped off by my mum or we took the bus. This place was so much nicer, run by medical students, and less oppressive. I have fond memories of this place <3. Now, it's my turn to do the dropping off 🙂

Do you have any memories of your early Islamic education?